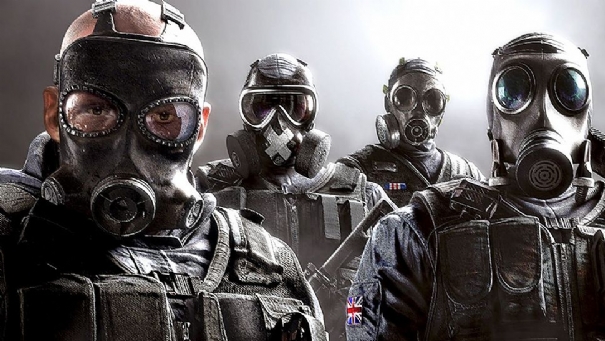 Fixed – Attempting to breach without detonating the breach charge in the rappelling swing motion breaks the Operator’s animation.
Fixed – The hitbox surrounding Castle’s headgear is not accurate.
Fixed – Melee range is extended when striking from a low stance to a high stance.
Fixed – Users are not able to stand up when pressing [Shift] while prone in Barbed Wire.
Fixed – Operators sometimes appear as if they are flat. (No longer will Tachanka appear as if he is from another dimension. Unless… is he?)
Fixed – Holes created by Impact grenades do not reliably replicate the destruction on all clients.
Fixed – Throwing multiple gadgets at the same location in succession results in unexpected collision.
Fixed – Buck’s shotgun does not reliably create vaultable holes. (Further improvements made)
Fixed – Dying at the same moment as throwing a gadget will result in a duplicate of the gadget.
Fixed – Placed charges remain floating after the surface has been destroyed.
Fixed – Operator’s weapon disappears when attempting to pick up a gadget and then cancelling immediately.

Fixed – Changing the Action Phase Duration from 360 to 600 seconds results in the incorrect time being displayed.
Fixed – Abandon Match quit option persists into the next game session.
Fixed – Caster can be muted in the lobby even if voice chat is not functional.

Fixed – Players are stuck in the defuser placement animation if attempting to place the defuser on a ballistic shield.
Fixed – When Echo has his secondary weapon drawn, the animation for destroying the defuser is broken.

Fixed – The hostage is shown with the defuser icon on the HUD.
Fixed – Auto-reload is disabled for ballistic shield Operators carrying the Hostage.

Fixed – Players do not receive points for discovering the objective.

Fixed – Major freezing issues occurring on PS4 when Hibana fires her X-KAIROS gadget for the first time.
Fixed – The sound effect of the X-KAIROS gadget can be heard across the entire map.
Fixed – Pellets do not stick to the corners of trap doors properly.

Fixed – No sound is made when placing an Exothermic charge on a reinforced wall while rappelling.

Fixed – If Doc is downed while healing himself, he will enter a DBNO state, but will not be down.

Fixed – Players are able to use Twitch drones as support cameras.
Fixed – Picking up her Shock Drone and pressing the action button at the same time results in Twitch being stuck in an animation.

Fixed – Jammers do not block remote triggers if Operators stand within the Jammer’s radius.

Fixed – Cluster Charge does not make holes in trap doors.

Fixed – Pressing the left and right button quickly results in a broken animation.

Fixed – Level of detail issue on multiple shadows.
Fixed – Players are able to vault into wooden beams, causing a clipping issue.
Fixed – Drones do not have proper collision with the Western Tower.
Fixed – Users can remain stuck when vaulting over the bar.

Fixed – Echo’s drone does not experience proper collision with some ceilings.

Fixed – Bullet effects can extend outside of the walls.

Fixed – “Destruction Master” Ubisoft Club Action is not unlocked if the player dies while breaching.
Fixed – Players can sometimes be stuck in their own corpse after changing cameras.
Fixed – Textures disappear from Hibana’s hood when viewing from a distance.
Fixed – Players are able to disable all maps in the matchmaking preferences.
Fixed – Capitao’s ammo count displays as 3/-1.
Fixed – Weapon crosshairs are displayed when viewing a teammate’s drone during the preparation phase.
Fixed – When performing a one shot kill to the enemy’s neck, the points for a headshot bonus are not award.
Fixed – Remaining rounds for the Bearing 9 shift in spectator mode.
Fixed – Inconsistency between the amounts of time displayed in “Surrender Sanction” and under “Ranked”.
Fixed – Performing a melee action while firing a shotgun causes a broken animation.
Fixed – The ammo count for Capitao’s tactical crossbow does not display properly when being spectated.
Fixed – Scoreboard updating is significantly delayed.
Fixed – Operators are not standing in the proper location in the MVP showcase.
Fixed – Ubisoft Club challenges are not available.
Fixed – Error 3-0x000A0003 is displayed when accepting an invitation after having gone through a suspended disconnect message.